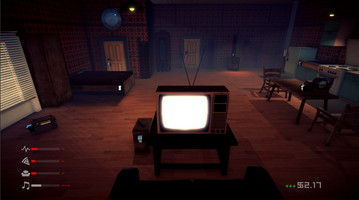 After many months of work, in which my family situation caused the development to be delayed, Dystopicon is almost finished.

Finally, following the advice of good friends of the studios @HiWarp, @ValhallaCats and the game designer @Alcarendor, I decided to go from playing in the third person to doing it in first person, to give more immersiveness to the game. The goal was for the player to really feel the protagonist of the story, not the puppeteer who manages a character. In addition, several elements of the scenario were reorganized and the door was placed as the vanishing point of the perspective, highlighting its importance as a final objective. Players see in front of them the exit to their situation.

All this involved reorganizing the scenario and placing the devices in another way so as not to hinder other elements.

I also wanted to add more stories besides the main one. For this reason, a parallel line has been included for the player, in which it is possible to unite the dissidents and the testimony of some previous inhabitant of the house. There are 8 different endings and reaching one or the other will depend on the way the player plays.

The aim of the game is that the player feels the oppression of performing repetitive tasks in order to get out of that loop. The interpretation of the story and its comparison with real life left in the hands of the player

The game is now in the phase of testing and adjusting parameters to be sure that it is not too easy or too difficult. Daily events appear in random order. With this we get someone who does not reach the end can return to play without knowing what will happen on a given day.